Principal Tyson Tlachac contributed to a September 25, 2014 Milwaukee Journal Sentinel story about schools that are successfully closing the achievement gap.

Seeds of Health and the University of Wisconsin-Milwaukee are pleased to announce that Tenor High School is at the top of the list of public high schools in the City of Milwaukee. 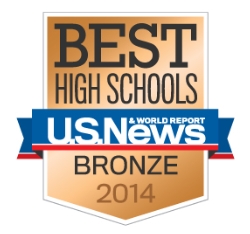 Tenor High School has been awarded a Bronze Medal from U.S. News & World Report in their 2014 ranking of America’s Best High Schools.

On April 9th, the Board of Regents approved an additional five year contract for Tenor High School, authorized by the University of Wisconsin Milwaukee.

Schuessler family finalist for the charter volunteers of the year award

The Milwaukee Charter School Advocates Awards Committee was inspired by the work John and Dawn Schuessler do for students and the school.

Tenor chosen as finalists for high school of the year

Tenor High School has been chosen by the Milwaukee Charter School Advocates as one of three finalists for the high school of the year award.

Tenor High School receives the Wisconsin School of Recognition Award from the Department of Public Instruction for the 2013-2014 academic year.
RSS Feed